This is a study how the numbers of the summer olympic medals per capita per country have progressed during 1896–2016.

Have you noticed the depression and stagnation in western world? I suggest that we are lost with the cultural battle of the civilisations of our time. China and many other developing countries are progressing rapidly and they are not doing it how we wanted it to be in the west. The old powers are weakening: USA is strongly polarized and Europe is without vision.

The legacy of western world is grandiose but our generation is ignoring it because, well mostly because of the 24/7 spa of modern entertainment, but also because we have been taught to be ashamed of our past. But the mistakes were (and are) analyzed. We shouldn't be overly critical either because it can paralyze and depress which is exactly what is happening now in the west.

Finland is a good example of the potential prosperity that can be achieved when peace and hard work are present. Finland turned 100 years in 2017 and more people have started to look at where we are coming from and who we are. And as it turns out, Finland is, or at least was, one of the least failed countries in the world (source).

While reading the list of Finnish achievements as a nation, one of them made me amazed: Finland has the most summer olympic medals per capita (source). The achievement is a great example of what a small but strong nation can reach. Therefore I wanted to research it a bit more and find answers to questions: has Finland always been number one and who are the rivals? What's the current situation and can Finland keep the lead?

Sports and athletics are not very popular in present day Finland so eventually we will lose the lead unless something happens.

Claims of Finland being the best in the summer olympic medals per capita always seems to be based on today's populations. But shouldn't we make the calculations based on the population of the time when the medals were actually won? Yes. So let's do a more accurate analysis how the amounts of the medals have progressed.

First we need input data. The medals and population data is obvious but there are also some political issues because the borders of countries have been moved. For example, does modern day Finland own the medals won by Finnish people before 1917 when the country declared independence? Or does modern day Russia own the medals won by Estonians during the existence of Soviet Union?

The sources used in this study:

After having input data we need a method to find information out of it. The steps are: 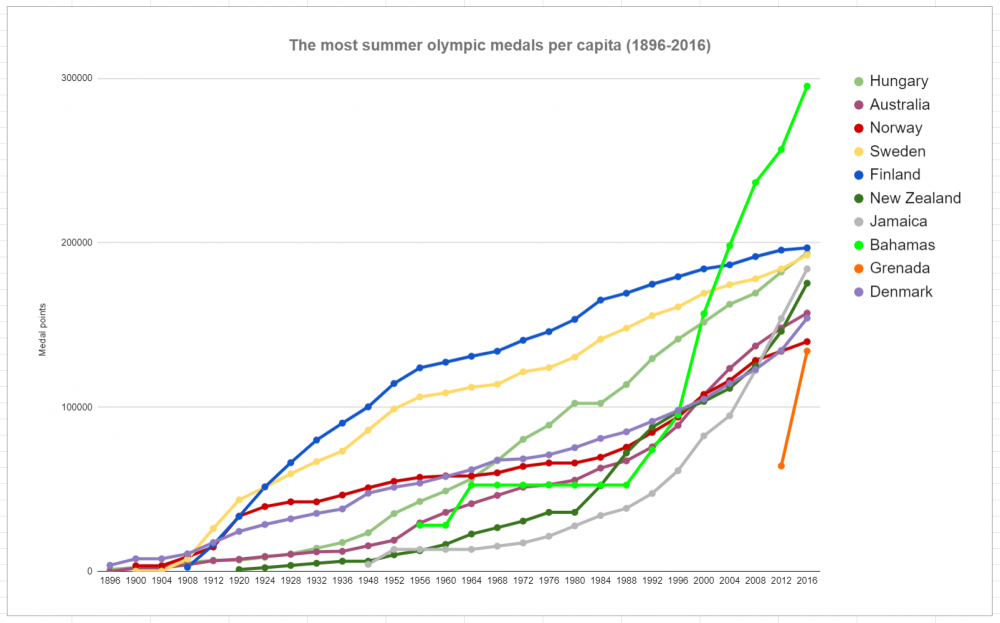 Surprisingly Finland is not leading the competition when the comparison is done in more accurate manner. Bahamas is the first one–overwhelmingly. A few questions arise.

First, how is this possible? Finland isn't the number one? Yep, it's true and it's because the population of Finland has not increased as much as the rest of the world since 1896. So if we use only the population numbers of today, it benefits Finland because the nation is nowadays much smaller compared to the world population than it was when Finland won most of the medals.

Second, what is this Bahamas and how they are so good? In total Bahamas have won 14 medals in nine olympic games while their population has been 270,000 in average in the olympic years. Finland has won 303 medals in 25 olympic games while the average population has been 4,410,000. Bahamas is a small archipelagic country in the Caribbean and they are pretty good in short distance running.

Bahamas and Finland are very different sized countries but to be honest, countries like India and China are even more different. And for example if Tuvalu got one medal, their points would be about 750,000 which is even more than double to Bahamas. And one medal by Vatican city would mean 9,330,000 points. 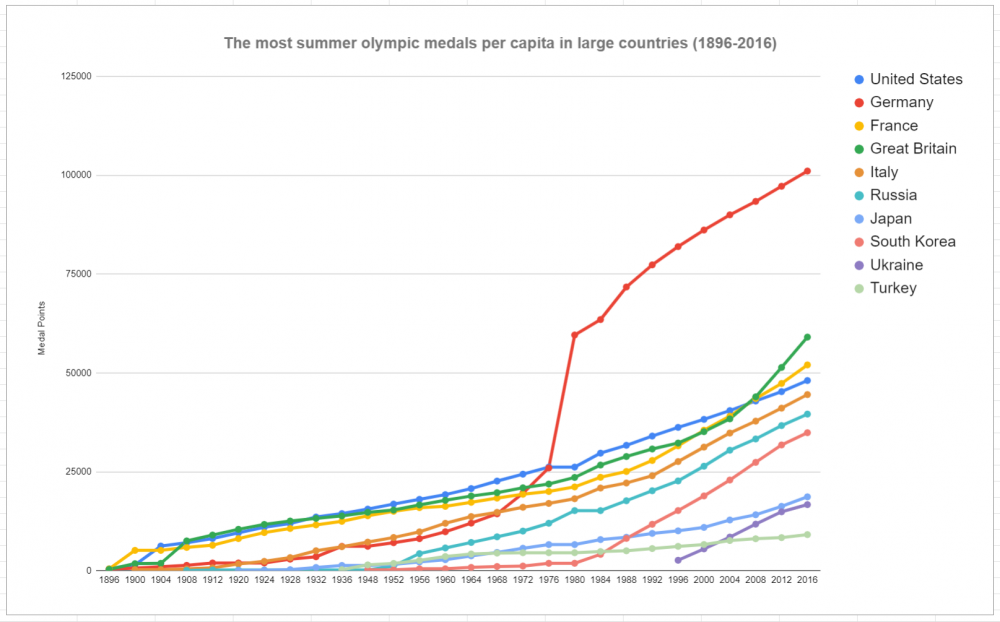 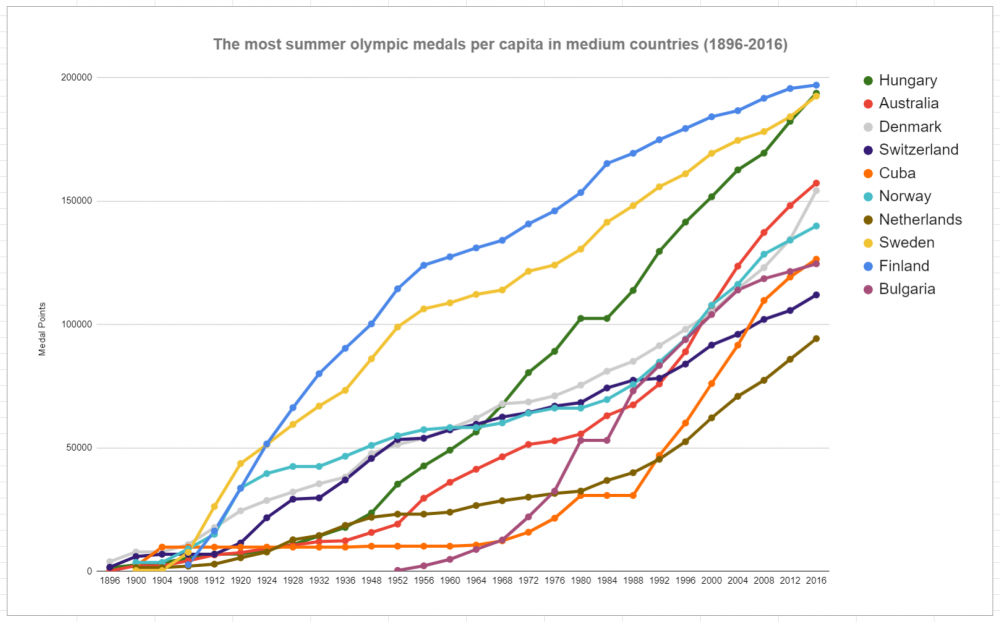 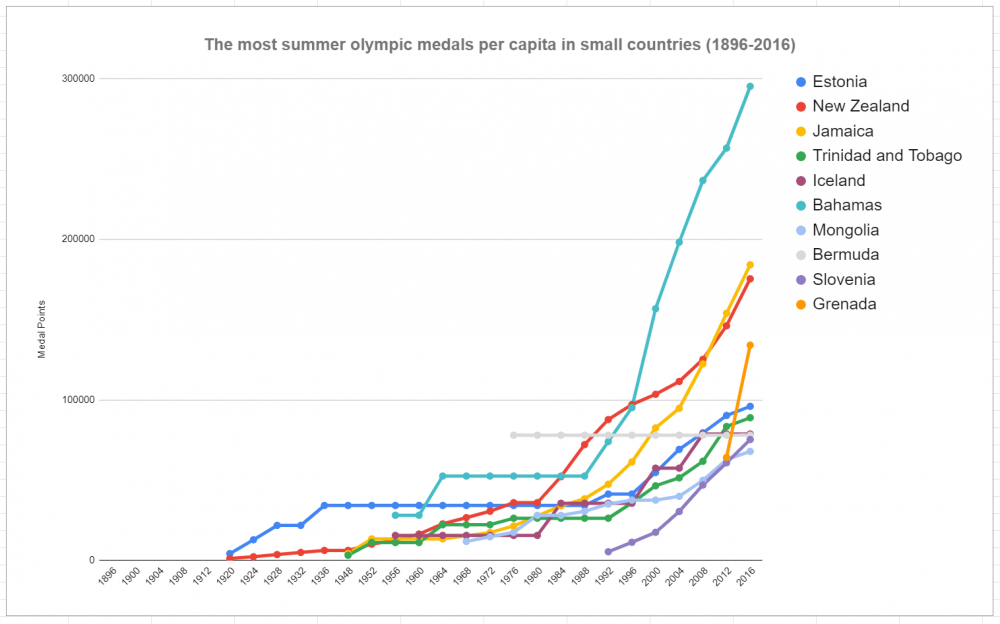 This was bad news to Finland. The only option left is to annex Bahamas and its medals. Send out the hornets!